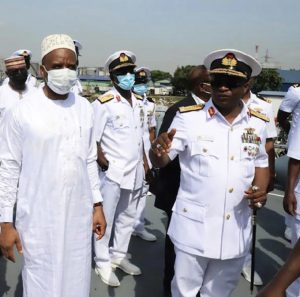 Dr Jamoh who joined the Chief of Naval Staff at the Naval Dockyard in Lagos to witness the arrival of the Ship from the United Arab Emirates commended Nigerian Navy, which he described as a critical partner in actualisation of the Agency’s maritime security mandate.

He said, “The platform would also help in consolidating on the safer passage being recorded for vessels, cargoes and crew members transiting through the Gulf of Guinea while also fighting oil theft and other maritime related vices within the country’s maritime domain”.

Speaking during a tour of the vessel, the NIMASA DG assured the Chief of Naval Staff that the Agency is committed to strengthening the collaboration between both organs of Government by providing logistics support for the maintenance of the NNS KADDA. 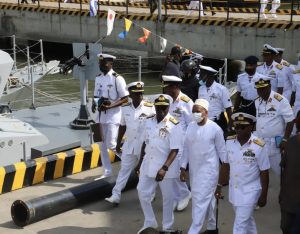 age and port call to about five countries.

NNS Kada was ordered from Damen Group in 2019 and built at Albwardy Damen shipyard in Sharjah, UAE. It was laid down in December 2019, launched in June 2021, and handed over to the Nigerian Navy in Sharjah on March 30. The vessel departed for Nigeria on April 1 and prior to its arrival in Lagos, made stopovers in five countries: Angola (Luanda), Gabon (Port Gentil), Kenya (Mombasa), Oman (Port of Duqm), and South Africa (Cape Town).

Based on Damen’s LST 100 design, the ship will be used for a range of duties including strategic transport of equipment and troops, humanitarian assistance and disaster relief operations, and to project maritime security into the Gulf of Guinea.

With 1,300DWT, an overall length of 100m and a 16m beam, the LST can carry a crew complement of 32 plus 16 embarked marine forces (EMF) in the deckhouse, with accommodation for an additional 234 EMF at mid-ship below the main deck.

NNS Kada is powered by two Caterpillar 3516 diesel engines and four Caterpillar C18 generators to provide a top speed of 16kt and a standard range of 4,000 nmiat 15kt.

It features a bow ramp and davits for two landing crafts, a 540-m² roll-on/off (Ro-Ro) deck, and a 420m² cargo deck for dry stores and ammunition. The ship deck has the capacity to carry a medium-sized helicopter.