• We are willing to cooperate with NIMASA – BOAN President 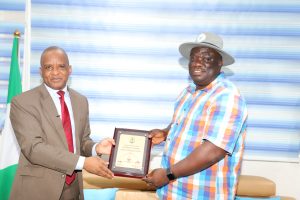 The Director General of the Nigerian Maritime Administration and Safety Agency (NIMASA), Dr. Bashir Jamoh noted that a well-regulated barge operating industry in the maritime sector is critical to ending gridlocks on ports access roads in Nigeria.
The NIMASA DG stated this when he played host to the Barge Operators Association of Nigeria (BOAN) led by the President, Hon. Bunmi Olumekun at the head office of the Agency in Lagos.
“Barge operations have helped to reduce gridlocks in Apapa, as they are involved with the transportation of container goods from one point to another within the inland waters, thereby putting less pressure on our roads, while also contributing their quota to national economic development”, Jamoh remarked.
Speaking further, the NIMASA DG urged the operators to invest in modern state of the art barges that can enable them compete favourably with their foreign counterparts, as this will help them remain in business and protect them from foreigners taking over their jobs.
While assuring them that the Agency will do all it can to promote barge operations as an alternative means of transportation, he enjoined them to brace up in the aspect of training of their members, as this will help them meet up with modern day realities and encourage professionalism in the discharge of their duties.
”Capacity development is good for the industry players in order to remain relevant, while being able to compete favourably with operators in other climes. The business of shipping is evolving with increase in technological advancement, hence training cannot be toiled with, in order to remain valuable in the shipping market,” Jamoh averred.
Furthermore, he disclosed that the Agency has begun the wreck removal exercise across the country, in line with the directive and approval of the Federal Executive Council (FEC) in order to ensure the channels are free for navigation, while also avoiding accidents on the waterways. “This is the first time the Agency has undertaken a holistic approach to wreck removal, cutting across all the zones from Lagos, Port Harcourt among other areas all geared towards safety of navigation”.
Earlier in his address, the President of the association, Hon. Bunmi Olumekun acknowledged the efforts of the Agency in carrying out its mandate for the growth and development of the Nigerian maritime sector, and pledged the continuous support of the association and cooperation with the Agency towards the realization of the three-point agenda of the current administration.
Hon. Olumekun, who noted the involvement of foreigners’ in barge operations in Nigeria, called on the Agency to facilitate access to loans at single digit interest rate to help operators acquire state of the earth barges.